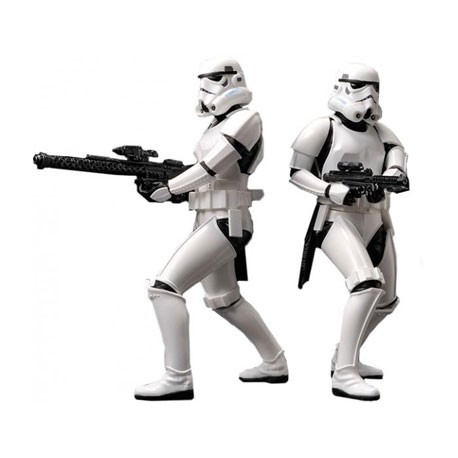 Star Wars ARTFX+ Statues bring you all of the quality and detailing that you expect from an ARTFX release in a great smaller scale perfect for collecting!

As any fan will tell you, the only thing cooler than one of the faceless soldiers of the Empire is having two of them! The Imperial Stormtrooper's iconic white armor is a symbol of the Emperor's strength and domination, feared throughout the Galactic Empire.

Joining the ARTFX+ line, these two Stormtroopers are perfect miniature versions of the onscreen characters, with fully detailed armor and weapons.

In fact, they both come with interchangeable four different kinds of arm parts and two different style of leg parts! Giving you the option of eighteen different posing combinations!

Like the other ARTFX+ Statues the Troopers also have magnets in their feet for variety of display on their included bases.