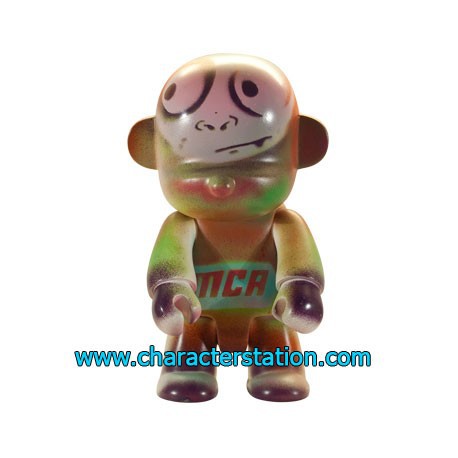 Evil was born in 1991, when one of MCA’s favorite entertainers, Pee Wee Herman (Mr. Paul Reubens), was arrested in an adult movie theater. Agitated by the absurd way in which Reubens was demonized by the media, MCA manipulated his mug shot, added devil horns to his head, and sarcastically wrote the word “Evil” beneath it. He printed up T-shirts and stickers with this image and began distributing them in and around Boston: Since then, Evil Design has spread throughout the world.

If you picked up Kid 606’s critically acclaimed CD The Action Packed Mentalist Brings You the Fucking Jams, or own a T-shirt from Weezer’s Pinkerton world tour, or from Mission of Burma’s initial string of “Inexplicable” reunion shows, then you’ve seen his work.

MCA has also made a name for himself in the gallery world over the past few years. Aside from his highly successful collaboration show “Destroy You, NYC – MCA + MAGMO” at Orchard Street Gallery in Manhattan, he also recently had a solo show (“Simian Nation”) in Boston at The Lab as well as taken part in a three man show (with Abe Lincoln Jr. & Ethos) at the Rotofugi Gallery in Chicago to name just a few.

These days, MCA is most excited about his venture into the realm of toy design. Hong Kong–based company Toy2r has released over 70 of his toys so far, including the original sculpt 5” Evil Ape figure (in various variants) and the 8” Elder Ape Qee (which also comes with a 3” MCA Qee). Other creations include: ‘No Music, No Life’ 2.5” Evil Ape Qee series (2 series, 33 different Qees total), A Circus Punk (“The Wizard”), a WZRD Generations Trexi in Series #2, a World Cup ’06 Trexi, and a BUD for Jamungo. Also be on the look out for MCA’s first book, published by Toy2R – ‘Simian Nation.’

“MCA, the mastermind behind the Evil Design collective, started said group in the early ‘90s. Kind of like the Wu-Tang Clan, they go on tour separately and also perform as a group. MCA & Evil Design approach this whole street art thing with genuine comic talent, something totally lacking in the scene in the last couple of years.” – Streetwear Today